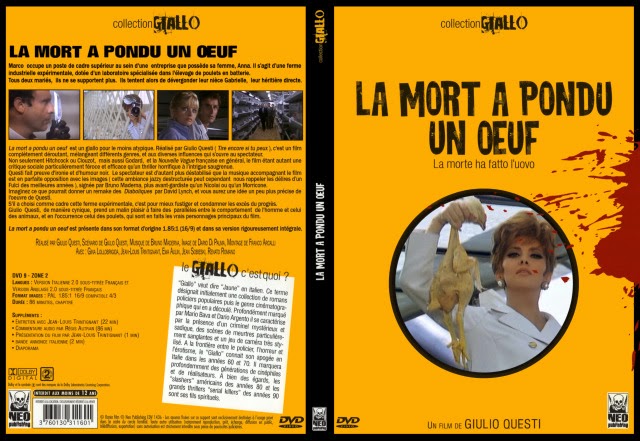 Marco (Jean-Louis Trintignant) is a chicken breeder who is married to the strong-willed Anna (Gina Lollobrigida). When her niece Gabriela (Ewa Aulin) comes to stay, Marco instantly falls for her. They plot Anna's death but unbeknownst to Marco, Gabriela is secretly in love with Mondaini, who along with Gabriela, plans to murder both Marco and Anna. They succeed in knocking off Anna, but before they can set up Marco for the crime, he discovers the body and disposes of it. Unfortunately for Marco, he accidentally falls into the pulverizing machine. The police arrive, convinced that Gabriela and Mondaini (Jean Sobieski) have killed Marco and so set about to look for the body.

My favorite Euro-trash film ever. I have watched it dozens of times and have yet to ever tire of the many twists and turns served up by the film's labyrinthine plot. The opening montage of characters and incidents in and around a high rise hotel displays the talent editor Franco Arcalli brought to the package.  The cast has never been better, especially Trintignant who gives a performance that keeps you in the dark as to his true intentions. Lollobrigida's subtle lesbian attraction for Aulin helps to explain why her character has liitle or no use for her husband and spends most of the time belittling. Brilliantly directed and edited, the film's score will drive you nuts (yet it's appropriate). I'll always remember that when I went to MIFED (a film buyers Expo in Milan), Claudio Fuiano gave me the soundtrack album by Bruno Maderna. That's the kind of person Fuiano (the king of Italian soundtracks) is. No way any plot synopsis could ever do this film justice. This film was discussed in the book CLUCK, the only reference work on chickens in the cinema.
Posted by ledster at 12:28 PM